[su_icon_text icon=”icon: quote-left” icon_color=”#FFFFFF” color=”#FFFFFF”]The government should give us more protections such as completely freezing the rent of our houses. With this crisis, if we are laid off, how are we going to pay our rent[/su_icon_text] 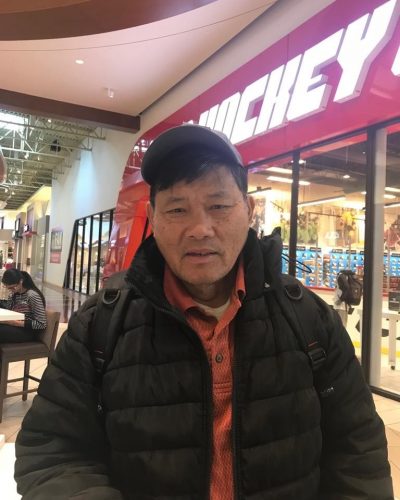 Stanley Maranion works at Tsawwassen Mills Mall as a janitor. Since the outbreak of Covid-19, most of the stores have closed, which has led to a reduction of hours for Stanley and his co-workers.

Nonetheless, each day Stanley takes the bus to get to work so he and his co-workers can disinfect and sanitize the massive outlet mall for the ongoing flow of human traffic.

[su_quote style=”default” cite=”” url=”” class=””]The hardest part right now is sanitizing everything that needs to be sanitized. I have to sanitize all the six entrances at least twice a day,” he explains. “We are using stronger chemicals that we need masks for.[/su_quote]

Before arriving to Canada in 2013, Stanley worked for 15 years in the Philippines, as a local government chief executive. He also spent over 10 years working as a mechanical engineer in various Middle Eastern countries. However, when he came to Canada, he had to give up that work and committed to work as a janitor.

“I think that the job we are committed to do is very important because it’s for the safety of shoppers and the public. We should be given more of a reward for the work we do.”

With the outbreak of Covid-19, Stanley explains he and his coworkers are feeling increased pressure to do more work and are concerned about what will happen to them in the next few weeks.

[su_quote style=”default” cite=”” url=”” class=””]We are worried because we still don’t know if we will be laid off. So far there have been no announcements. We are just thankful that we have formed a union; it’s giving us the tools to claim our rights as workers.[/su_quote]

For years, Stanley was moved from one cleaning contractor to another due constant contract changes that took place at his worksites. However, with the new successorship legislation passed in BC, last October, Stanley was able to lead his co-workers into forming a union with SEIU just before the cleaning contract at the mall changed. By doing this, the cleaners at Tsawwassen Mills were able to protect their jobs, seniority and wages and won paid sick days and health benefits in their union contract.

But, as the Covid-19 public health crisis intensifies each day, thousands of workers are at risk of layoff and like many workers, Stanley believes the government should be doing more to protect workers, whether they are unionized or not.

“The government should give us more protections such as completely freezing the rent of our houses. With this crisis, if we are laid off, how are we going to pay our rent?”