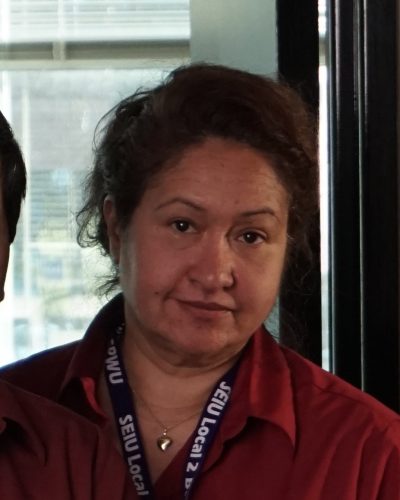 Vilma Lopez has worked as a cleaner at BC Hydro for over 17 years. Since the outbreak of the Covid-19 pandemic, Vilma and her co-workers have been asked to disinfect the entire building and perform deep cleaning at the Burnaby location where she currently works at.

It’s a very difficult situation for me as I don’t have the luxury to miss work,” explains Vilma. “I have to work even though there is great risk to my own health.

Vilma is a diabetic, which puts her at a greater risk if she were to be infected by the Coronavirus. “It seems that our protection and health doesn’t matter as much.”

Although most of the building is now vacant, Vilma worries about her exposure as some people are still coming into the building and their offices.

Even though there are less people coming to the building, the work has not stopped. “On the contrary,” explains Vilma, “we have been given more work to do.” Vilma is also dealing with added financial pressure; her husband’s employer recently reduced his hours to part-time. She feels she can’t miss a single shift.

The pay enhancements should not be limited to work performed during the Covid-19 pandemic. Janitors have long been underpaid for doing work that is important to public health and safety and the pay should reflect it.

Last year, the cleaners at BC Hydro had to fight to keep their jobs and union benefits after the property manager, BGIS, decided to award the cleaning contract to a non-union contractor.

Amidst the fear of losing their hard fought health and dental benefits, paid sick days and other modest gains in their union contract, Vilma and her co-workers were able to wage a successful public campaign that pushed BGIS to reverse their decision and keep the cleaning contract with the unionized company.

However, this did not stop BGIS from making cuts to its cleaning costs and, as a result, the cleaners at BC Hydro have faced low-staffing levels and workload issues that have increased health and safety risks.

Janitors have had to fight tooth and nail for every inch they’ve won. The question now is whether property managers are finally going to recognize the invaluable work cleaners do and start giving frontline workers the respect they deserve, including a living wage.